The St. Mary community is proud to showcase our church on the Painted Churches of Texas tour.  In 2011, we completed a major conservation and restoration project with artist Robert Marshall of R. Alden Marshall & Associates LLC, an art conservation, sculpture and gilding studio based in La Grange. Mr. Marshall and his associates have completed work for churches, museums, state, local and national government properties, universities, as well as corporate and private collections. We are pleased to have him here working with the St. Mary community. 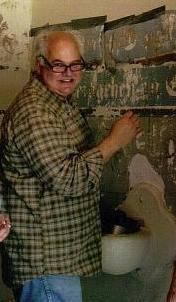 Artist Robert Marshall at work in 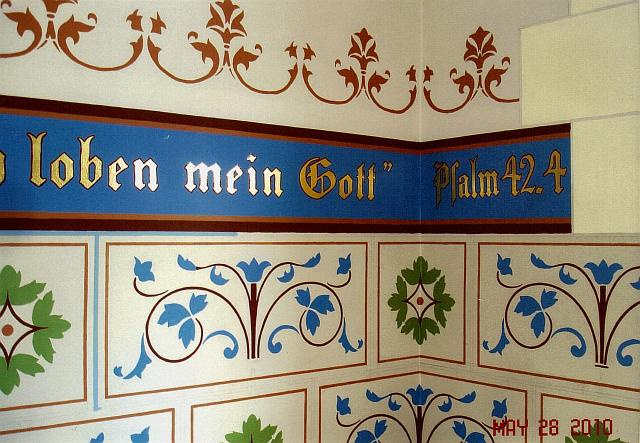 The removal of over paint applied in a past restoration involved determining the proper solvents and dwell times to soften the coatings and not damage the original paintings. After investigation of and removal of the over paint from the angel on the proper left of the arch, in which the viewers right hand would be to the south, the original art work was found to be damaged and was inpainted successfully as was the face or bust of the proper right angel. The robes of the PL angel were uncovered, and it was determined that to remove the over painting over the entire surface would have not so much of a dramatic change in the quality of the work from what is now visible. Though the faces are done in a fine portrait quality, the balance of the work/painting in the testing areas was found to be of similar quality of the over painting on the original work with little change other than slight color changes.

The removal of the over paint of the proper right angel produced the top of the angels face with the jaw line and neck missing due to plaster damage. Here is this photo the damaged areas are being inpainted with gouache but are far from done. Several small areas of loss were found in the face area but were inpainted with out much trouble.

We will be repainting and re gilding most all of the arch and adding ribbons and a seventh seal to the seals on the book of life. As well the entire lamb was repainted to a lighter more “spotless” lamb. I will be altering the colors back to some of the original colors found namely the sky and clouds around the angels, the robes of the angels. The scope of work in this treatment also requires the re-gilding of damaged or lost areas.

The artwork of the arch is now more closely resembling that of the original artist. My inpainting is located at the faces and hair of the angels and over painting most everywhere else. Total time used to execute this was 124 hours. Materials added were mainly artist oil colors as well as some fine gouache using a barrier coat of wax free blond shellac then sealing with the oil born acrylic conservation varnish by Golden. The gold was applied and painted with detail as before with gouache directly on the gold surface. No sealer was used over this gouache or gold so that the gold shines and reflects the light as it should.

We removed loose dirt and debris with fine brushes and a HEPA vacuum and washed the surface with a weak solution of distilled water and ammonia. We then used a   .03 % solution of H2O2 to bleach out mildew stains on the canvas.  We found that most of the canvas was barely attached to the wood ceiling due to the failure of the original wheat paste size/adhesive. We adhered the loose canvas with a poly-vinyl acetate by injecting it behind the loose fabric and working it in, then used heated irons and silicone release paper. We heated the canvas working the areas to solidly reattach the canvas to the wood without removal of the canvas. The canvas, wheat paste and wood were all glued together with this PVA. Many areas showed bare canvas, having lost paint in the lighter background areas over the years, and it was decided to over-paint these backgrounds, as well all the colors of the ceiling were duplicated with artist oil colors and the entire ceiling was inpainted.  The gilt trim was repaired or replaced as needed and new gesso and base finishes were applied followed by 23.75 kt gold leaf from Bavaria. The repaired surfaces of the painted canvas were covered with a coat of a clear satin conservation varnish used for paintings.  The walls were treated by removing the loose coatings of paint and exposing the remnants of the original decoration, powdering plaster was consolidated and cracks patched.   The original decoration then restored to reflect the original and the 1940s photos.

The project took nearly 12 months with a crew of as many as nine, working 40- to 60-hour weeks.